I never met him. I’m not sure if I’ve even been in the same room as him. I was at a product introduction speech at Macworld in 2003, but I don’t remember if Steve was the keynote speaker at that expo.

But Steve changed my life.

I was a senior in college when the now-famous 1984 commercial aired during the Superbowl. The next year I was working as a booking agent for small performing arts talent agency in New York city when our secretary sent the wrong contract out for a show and caused a huge ruckus.

I told the boss we should get a computer so we could keep track of all our stuff better. He sent me out shopping. My conclusion: buy a Macintosh. I was convinced that, combined with two other new things—desktop publishing and a laser printer—we could keep track of everything and even create some of our own marketing material!

(Side note: That boss told me he wouldn’t buy anything from Apple because his friend in California said they wouldn’t be around in 5 years. Today Apple has one of the highest market cap’s in the country and over $80 BILLION in the bank. I guess he was wrong!)

I worked with my first Mac in February 1987, and I was hooked. Next Wednesday will mark my 24th anniversary in the computer business, and I have loved it from the beginning. Steve Jobs is why. He had the vision that everyone could (and would) use a computer. But only if they were easy to use. 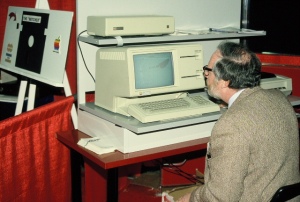 If you don’t think he was right consider this: how many of you either own or have owned an Apple I, II, IIe, IIc, IIgs, Lisa, or a Macintosh computer? How about an iMac, iPod, iPhone, or iPad?

That first time I used a Mac made me realize that there were a world of possibilities that I could grasp if I worked hard enough. Thanks in large part to Steve Jobs, even the smallest kids today are connected via technology to a world of information their parents could only imagine. Technology is part of our everday lives. Part of the job of Parents as Teachers is to help parents guide that connection in appropriate ways.

I’ve been fortunate to have some good teachers in the past 24 years, but the vision that drove Steve Jobs, and therefore Apple, allowed me to flourish and really enjoy the work I do every single day. Even the difficult ones.

Today Steve Jobs is being hailed as the Thomas Edison of our time.

So, thank you, Steve, for inspiring me to “Think Different” and to enjoy my life’s work.

Richard Wollenberger is IT Director at Parents as Teachers national office.